Jekyll & Hyde to be Live-Streamed with a Socially-Distanced Audience 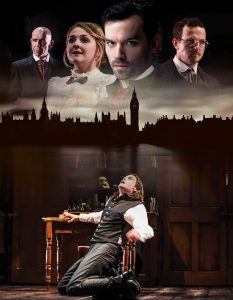 A thrilling adaptation of Robert Louis Stevenson’s dark psychological fantasy, The Strange Case of Dr Jekyll And Mr Hyde immerses you in the myth and mystery of 19th century London’s fog-bound streets where love, betrayal and murder lurk at every chilling twist and turn. Gripping, stylish and thought-provoking, this is unmissable theatre.

Nick Lane said, “In this chaotic period in our history, the arts serve as an oasis of peace and I’m absolutely delighted to be working with Blackeyed again to bring autumn chills down the spines of any audience member with Jekyll and Hyde. It’s a timeless story that we’ve put into historical context, adding detail that will intrigue people who know the novel and those coming to it fresh”.

The Strange Case of Dr Jekyll & Mr Hyde will be performed at the Wilde Theatre, Bracknell, on Friday 18 September at 7.30pm. The performance, recommended for ages 11+, will last approximately 130 minutes (including interval), and social distancing measures will be in place.

Tickets (in person) for the performance at the Wilde Theatre are £21, to include a digital show programme, and available to book from Friday 4 September at www.southhillpark.org.uk

Tickets for the live stream are £15 per device, to include a digital show programme, and available here.

Keep up to date with the latest on Jekyll & Hyde here.